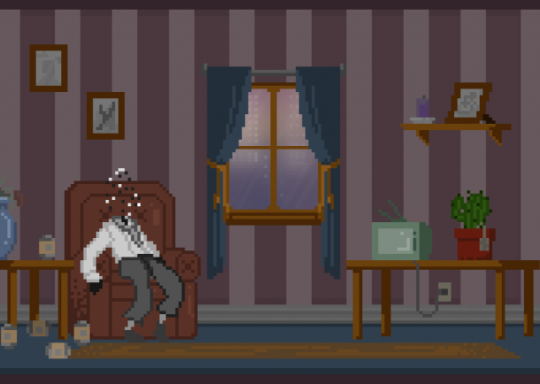 CONTROLS: wasd to move, r to enter doors, space to attack, y u i o to switch heads

Our group was made up of 5 people. Animation, monsters, protagonists, effects were done between myself and jhaku. Backgrounds were done by kusudraws. Music and sound effects were all made by pengosolvent. Our coding was made by Jon (the wizard) Duke who as far as I know does not have a tumblr, but if he gets one I will add him onto this list. Piecing together backgrounds in Unity and some debugging was done by myself. We also got a lot of support from another programmer named David Perrot who would help us when we got stuck on our own code and he was such an uplifting person that I feel I absolutely cannot finish properly crediting our team without mentioning his undying positivity and support.

Our game was made in 48 hours in Unity. The idea of the game is it is a side scroller with some very basic platforming where you swap heads to various objects that effect your combat. Each object is supposed to have various effects on how they deal with range, damage, or repelling enemies all together. There are a total of 13 maps, four enemies with their own unique idle, walk, death, and multiple attack animations. There is a total of 7 songs and 11 sfx made entirely from scratch.

The game is not fully complete as we did not have enough time to implement everything we did since we had to switch programmers half way through and start again from scratch on our code, but we have more than enough of our art done and all that’s left to fully complete it is to go back into unity, fix the few known bugs, make our audio loop properly, add dialog/pick ups for abilities and health.

Despite those things we need to fix, I for one am INCREDIBLY impressed with what we did in 48 hours (48 hours that I literally did not sleep just to do all of this, mind you). I am incredibly proud of our team. I feel also like we learned a lot during this time and went above and beyond. Again, I will be posting updates as they come along. Thank you to all of our friends and family and faculty from the college hosting this event for the amazing support! Our game is rough, but I am happy with what we accomplished!
Powered by